I’ve been so busy in the garden since back from hols but yesterday was the first day that it felt productive so I thought I’d keep you up to date. I’m actually just procrastinating from making a new flowerbed that I started a while ago and then left – it’s now totally overgrown with weeds and I don’t know where to start. More about that later – I promise I’ll post before and after pics!
Have spent all week weeding my 12 main flowerbeds, cleared self sown feverfew from the dahlia bed which had taken over and was swamping the dahlias – deslugged and fed the dahlias with fish, blood and bone. Hopefully they will recover and we will get a nice late summer to let them flourish.
Also direct sowed some more nigella and xeranthemums – maybe too late but I thought I’d give it a go. My biennials should have been sown earlier but I delayed because of the holiday. I had left my mum enough chores what with watering the tomatoes and pots so I have now sown, in the tunnel, sweet williams, honesty, wallflowers and foxgloves. I have sown some ornamental perennial grasses that need heat to germinate – pennisetum villosum, eragrostis spectabilis & deschampsia flexuosa (try saying that after a few glasses of wine!) I will keep you posted on their progress. Also eupatorium purpureum and lysimachia purpurea “Beaujolais” because I found the seed and thought I’d give them a go.
With all the terrible wet weather I’ve decided to sow more veg, ever the optimist, I firmly believe we are in for an Indian Summer! I’ve sown more broad beans, mange tout, climbing french beans and beetroot (and purple broccoli & cabbage for next year – I hate that brassicas are so slow). I need to sow more lettuce and mizuna direct into the veg garden asap to keep a continuing supply.
If you are interested in growing veg or already do so and would like good growing advice (organically of course) you should check out Nicky Kyle. Nicky’s website gives the most excellent, informative advice on growing your own and is so easy to read – I love it! 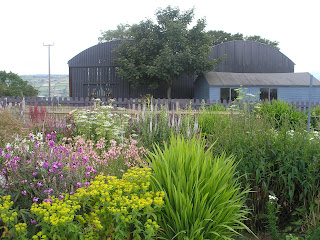 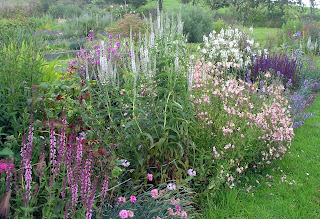 I can't beelieve it!