So much to do in so little time, and yet the ground is as wet as ever, unworkable in most areas which is frustrating. Bitterly cold the past few days which at least has slowed down growth after the mild winter. The cottage garden beneath the old ash trees would be the driest part of the entire garden which can be a problem in summer but we can at least work the beds no matter the weather.

A few pleasant days this month allowed us to complete a few tasks on our winter’s “to do” list. We removed the greenhouse in the cottage garden as, with the polytunnel, we don’t really need it – its removal will allow room for more plants – yippee!!

We have also removed the gravel paths in the herb garden to renew with better weed suppressing fabric underneath – the paths were rather uneven and full of weeds, very boring but necessary!

Back to the cottage garden, all beds have been cut back and weeded, the two large lupins have been lifted, divided and replanted. We have also lifted geranium Mrs Kendall Clarke who was accidentally planted at the front of the blue and white bed…now divided and replanted between the tall hybrid tea roses (to help hide their ugly legs!) and a few pieces have also been planted in front of the laid hawthorn hedge among the old roses.

The large golden daylily in the purple and gold bed was also lifted and divided (flowering had diminished last year) and another geranium wlassovianum added to make three in that bed – I love its neatness and foliage colours in spring and autumn.

Some 100 dutch iris have been planted together with some allium cowanii, we just need a decent mulch of composted bark and we can look forward to spring! 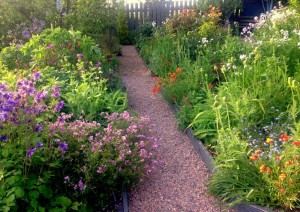